Current Situation: The Treaty in Danger

The Open Skies Treaty is in danger. Signed in March 1992, it has been in force since January 2002 and permits 34 states in Europe and North America to conduct joint, unarmed observation flights over each other’s territory and to take images using sensors with a pre-defined resolution. Its unique feature consists in the fact that during overflights, representatives of both the observing state and the observed state sit together in one aircraft. In consequence, military officers from different states engage directly with each other on a regular basis, which increases mutual trust.

In October 2019, several sources reported that the Trump Administration is considering to exit the treaty. Since then European allies and treaty supporters in the U.S. Congress have called upon the goverment to refrain from taking this step. They argue that the treaty strengthens military transparency, enables confidence-building, and provides important intelligence.

Why is the Open Skies Treaty important for Europe?

A picture is often worth more than a thousand words. Below we visualize the total number of active and passive quota flights between 2002 and 2019 to illustrate the treaty’s importance. Active flights (left) denote flights a state conducts over the territory of another state. Passive flights (right) are flights over that state’s territory. It should be noted that Russia and Belaru sand the Benelux countries (Belgium, the Netherlands, and Luxembourg) form groups of State parties under the treaty.

2. States make different choices about which treaty members to overfly. The US, Canada and European states within NATO conduct almost all of their flights over Russia-Belarus, plus some non-aligned states such as Bosnia-Herzegovina, Georgia, and Ukraine. Russia distributes its quota much more equally across all NATO member states. Joint Russian-Belarussian flights go primarily over Latvia, Lithuania and Poland.

Overall, the visualization shows that the Open Skies treaty, despite its 34 member states, consists of two camps: NATO members on the one hand, and Russia-Belarus plus some non-aligned states on the other. Moreover, European member states conduct most overflights. Thus, even if the United States left the treaty, Europe could still derive benefits from overflying Russia-Belarus. In turn, although Russia-Belarus would lose the ability to fly over the United States, it would retain the right to conduct overflights over European states and Canada, which together currently account for more than 87% of its active flights.

If you want to know how to fix, preserve and strengthen the Open Skies Treaty, please look here.

Background: How does the Treaty work in practice?

The Open Skies Treaty describes the procedures for overflights and their technical features down to the smallest detail. All decisions pertaining to the interpretation of the treaty are subject to consensus within the Open Skies Consultative Commission (OSCC) that convenes in Vienna. Over the last 20 years, the OSCC has adopted more than 180 decisions.

Most importantly, the treaty sets a fixed passive quota for each member state. This is the maximum number of flights each state has to allow over its own territory. The number of flights a state can conduct is its active quota and cannot exceed its own passive quota. The distribution of treaty quotas roughly corresponds to the territorial size of the states.

These treaty quotas, however, merely denote the maximum of flights that are theoretically possible. In practice, State Parties negotiate the actual distribution of active quota flights each year anew. This usually happens in October when the OSCC meets with representatives of various national verifications organizations. In addition to these annual quotas, members of the now dissolved Western European Union (WEU) allow Russia to conduct a small number of flights above its maximum quota (42 flights) if they simultaneously take place over two or more Western European states. NATO members, on the other hand, have agreed not to conduct flights over each other. Hence, most states, except for Russia-Belarus, Hungary, and Ukraine, do not exhaust their treaty quotas. The United States, for instance, has never conducted more than half of its treaty quota (42 flights). Germany conducts two-thirds of its permitted number of flights on average, while most other states use less than 50% of the treaty quota.

The treaty also enables states to take flights together - most states do not possess aircrafts usable for overflights. This means that one actual flight shared by several states accounts simultaneously as a quota flight for all participants. By contrast, no matter how many states participate in one actual flight, it accounts for only one passive overflight for the observed state.

In our visualization above, we display 2060 active and passive quota flights. This number equals 1517 actual flights that took place between 2002 and 2019. Almost one-third of these flights are shared by two, three or even four states. Every year some planned overflights are cancelled for technical reasons and bad weather or do not take place because the observed party refuses to accept the requested flight path.

In practice, however, only optical and video cameras are in use, since member states have not yet certified the other options on aircrafts. Currently, member states are in the process of modernizing their equipment by changing from black and white wet-film to four-color digital cameras. While the maximum resolution remains the same, the costs for developing and duplicating images will decrease. 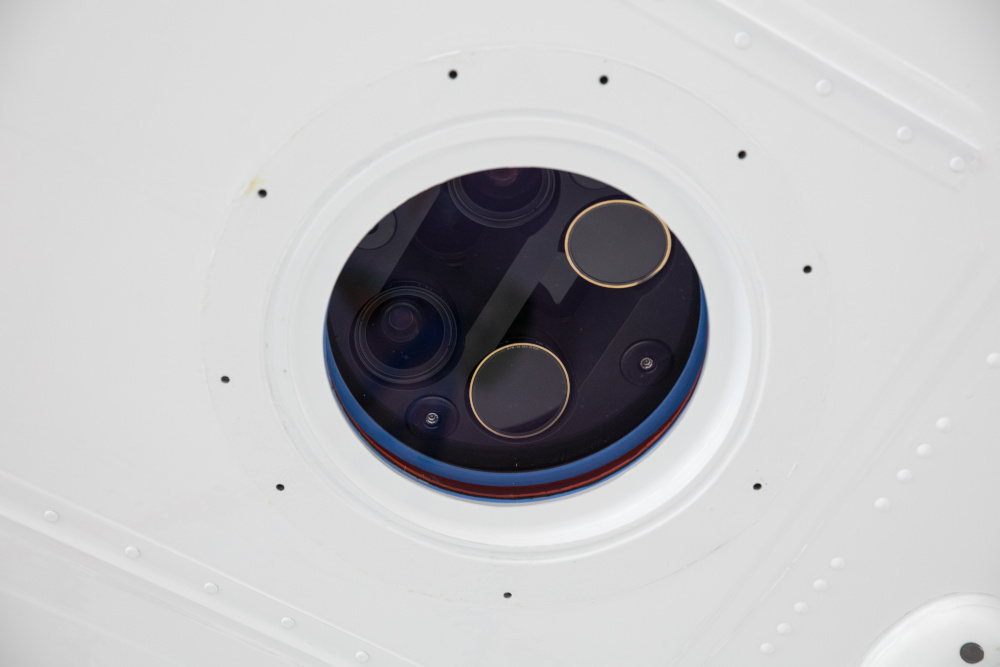 The planes used for overflights are without exception multi-engine transport aircraft. This has primarily practical reasons, because overflights, especially those shared between several State Parties, sometimes need to accommodate seating for more than 20 persons. Both Russia and the United States operate two aircrafts, whereas Bulgaria, Canada, France, Hungary, Romania, Sweden, Turkey and Ukraine each operate one aircraft equipped with the necessary sensors. In addition, a group of NATO members operates the Lockheed C-130 Hercules, but shares a single sensor pod that is mounted externally under the wing of the aircraft. All other states need to rent aircrafts from those countries that operate Open Skies aircrafts. 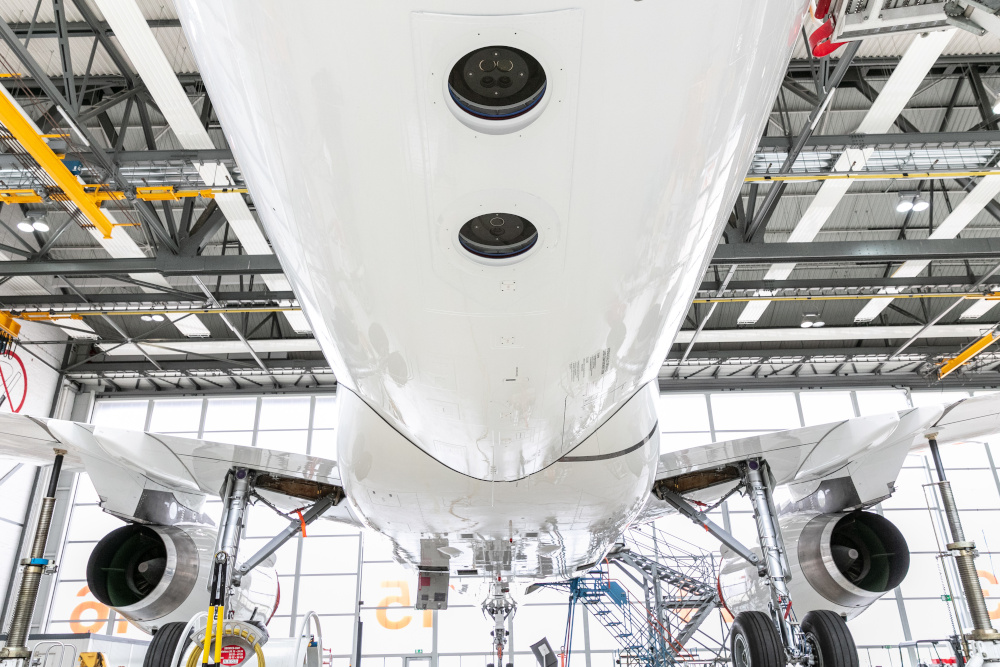 The treaty also specifies airfields for the starting and ending overflights, the points of entry to and exit from the state and even airfields for refueling. For example, Russia and the United States have four designated Open Skies airfields each, while Germany possesses two. Finally, the treaty sets the maximum distance for flights from each of these airfields.

The general timeline for conducting an overflight looks as follows:

A state wishing to conduct an overflight needs to notify the (other) state that it wants to overfly at a minimum 72 hours before its observation aircraft arrives at the point of entry. At least 24 hours before the arrival it must submit a mission plan that provides details about the flight path, the distance, and the estimated flight time, among others. The observed party has the right to propose changes to this mission plan. If that happens, the parties can negotiate for a maximum period of 8 hours. If negotiations are successful, the observing party takes off to the point of entry. If there is no agreement, the observing party can cancel the flight.

Upon arrival, the observing state has 96 hours to conduct its observation flight(s). First, however, officials of the observed party inspect the aircraft, the sensors and their associated equipment onboard to ensure treaty compliance. After the flights are completed, both parties sign the mission plan, which the observing party provides to all other states within a week.

Alexander Graef joined the Institute for Peace Research and Security Policy at the University of Hamburg as part of the project Arms Control and Emerging Technologies in March 2019. He holds a BA in Cultural Studies from the European-University Viadrina and an MA in International Relations from the Free University Berlin and the Moscow State Institute of International Relations (MGIMO). His PhD thesis (2019) at the University of St. Gallen explored Russian experts and think tanks in the field of foreign and security policy. In 2017-2018 Alexander Graef was a Doc.Mobility fellow of the Swiss National Science Foundation at the National Research University Higher School of Economics in Moscow. He is part of the FLEET-network of young experts specialising in security and cooperation in wider Europe, which was founded by the Regional Office of the Friedrich Ebert Foundation (ROCPE) in Vienna.

Alexander Graef's research focuses on conventional arms control in Europe. He is particularly interested in Russian foreign and military policy, the sociology of international relations and the role of (defense) intellectuals, experts and think tanks in public debate and policy formation. Methodologically, he applies different approaches to social network and discourse analysis. In his current policy work, he analyses the perspectives for confidence and security building measures in the Baltic and Black Sea regions and the developments within the Russian military and defense industry.

Moritz Kütt joined the Institute for Peace Research and Security Policy at the University of Hamburg as part of the project Arms Control and Emerging Technologies in August 2019. He studied physics and political science. In 2016, he received his PhD in physics from TU Darmstadt, working on the role of Open Source Software for trust and transparency in nuclear arms control. Prior to his time in Hamburg, he has been multiple times at Princeton University's Program on Science and Global Security. First, he was a Visiting Student Research Collaborator (2015-16), funded through an ERP stipend by the German Academic Scholarship Foundation, and later as a Postdoctoral Research Associate (2017-19).

In his research, Moritz Kütt develops new approaches and innovative tools for verification of nuclear arms control, non-proliferation and disarmament agreements. These approaches and tools seek in particular to enable non-nuclear weapon states to participate effectively in such verification activities. Besides classical instruments, he studies how new technologies (e.g. Open Source Software, Virtual Reality, Robotics) can be used for existing and future verification tasks. Currently, he is working on verification options for the recently negotiated Treaty on the Prohibitions of Nuclear Weapons and possibilities for new confidence-building measures in the European arms control context.